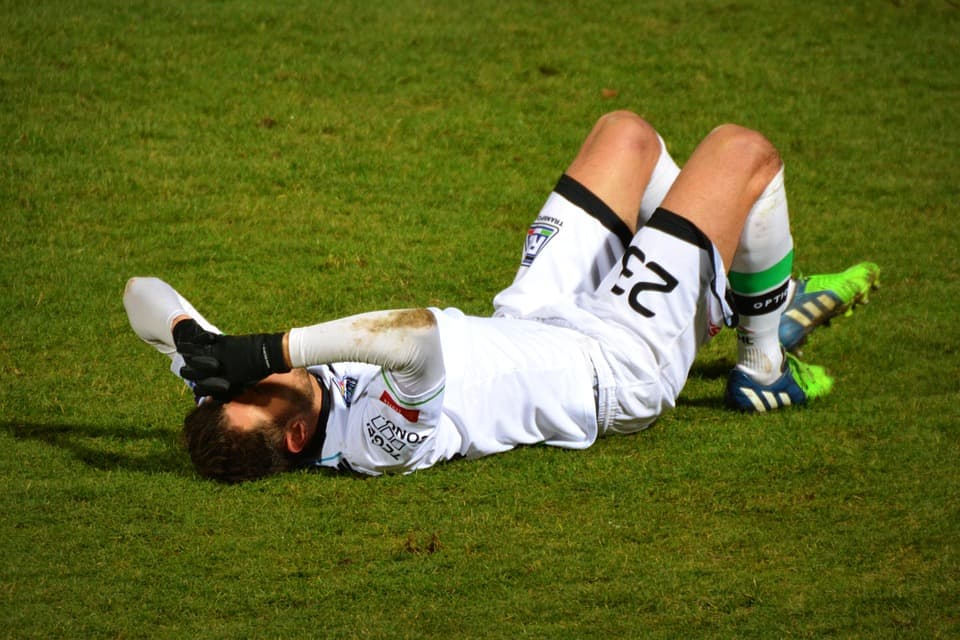 If there’s one thing that watching our favorite athletes dropping to the field of play with a catastrophic injury has taught us Average Joes, it’s this:

If even the world’s fittest athletes – with the help of the best trainers, nutritionists, and medical facilities money can buy – can suffer serious injuries out on the field, what does that mean about our chances?

Now, obviously, the overwhelming majority of us weekend warriors aren’t ever going to get creamed by a strong safety on a pass over the middle or laid out by a fellow rugby player in a scrum, but that doesn’t mean that we aren’t really ticking time bombs each and every single time we step out on the field to compete – or step into the gym to train.

In fact, according to information published by Dr. Michael Camp (Sports Medicine Specialist) in a sports website, men that lead active lives and are involved in some type of sport or athletics are more likely to deal with a serious injury or require surgery than those that lead more sedentary lifestyles.

Surprise, surprise! All of that time spent in the gym working out to keep yourself fit and healthy may be only accelerating damage to import ligaments, key tendons, and putting you in a position to go down with a crippling injury.

Obviously it’s always better to pursue a lifestyle that focuses on fitness and your health, and living a sedentary life is filled with some pretty serious and stark dangers as well.

Luckily though, you’ll be able to arm yourself with a bit of the inside information we offer below about the kinds of nightmare sports injuries you may suffer so that you can adjust and modify your training schedule over the way that you compete to avoid as many of them as possible.

Climb down off the bicycle already

Cyclists are regarded as some of the fittest men on the planet, and it’s easy to understand why.

They are the ultimate endurance athletes, regularly competing in events that cover the same kind of land that three or four full marathons would have in the same amount of time.

Obviously, cyclists are going to train to achieve the very pinnacle of their sport on the back of a bicycle (no surprise there), and it isn’t at all unreasonable for serious cyclists to spend close to 20 or 30 hours on the saddle of their bicycle each week while getting in some serious training.

That isn’t all that big of a deal from an athletic standpoint, but it is a MAJOR concern in the bedroom.

According to a report by the Boston University School of Medicine, men who cycle… “should be aware of the need for a properly fitting bicycle and comfortable saddle as well as the potential risks to sexual health presented by long-distance cycling.  This and other studies leave little doubt that too much time spent in the wrong saddle can lead to erectile dysfunction.

Yes, you read that correctly – too much time on the tiny saddles of most competitive bicycles can lead to a Limp William in the bedroom. That’s obviously not fantastic news to anyone that has been hoping to celebrate a big victory with a little bit of romantic companionship.

The easiest solution is to swap out your traditional saddle for a “no nose” saddle, one that provides a little bit more freedom and helps avoid the repetitive traumatic impact that usually leads to the ED problems in the first place.

Obviously, if you’re dealing with a little bit of erectile dysfunction from regular cycle training, you’ll want to think about getting your hands on that tiny blue pill Viagra to give you a boost until these nasty side effects wear off, which they almost always will.

Though repetitive cycling has been clearly recognized as a contributor to erectile dysfunction, it’s almost always temporary and reversible – great news for those that just can’t give up the bike life.

Your ankles are ticking time bombs just waiting to explode

Even though most men (especially those that follow competitive professional sports religiously) would tell you that they are most afraid of an ACL injury to the knee – the kind of catastrophic injury that can completely derail a career or stop you from competing on the weekends entirely – the injury that most men are going to have to face when they are active in sports is a low or high ankle sprain.

Incredibly soft and delicate tissue, ligaments, and tendons that allow us to use our feet in a variety of different ways, it should come as no surprise to us that our ankles are ticking time bombs just waiting to explode.

After all, 99.99% of all lower body weight is going to be placed upon this soft tissue when we run, when we pivot, and when we jump – or do anything else that puts our feet in contact with the ground – and when you multiply all of the force that we are applying, it’s amazing that they don’t give out more often.

The best way to avoid ankle sprains is to tape up religiously before you step forward on the field. There are plenty of YouTube videos out there to show you exactly how to use athletic tape to better support your ankles, and there’s a reason why elite level athletes all over the world – across almost all sports – take the time to do exactly this before they leave the locker room.

The overwhelming majority of lower body injuries you’re going to be dealing with as a result of athletic performance or competitive sports are going to have to deal with your lower body parts below the waist – but your lower back is also quite sensitive, and has a real tendency to blow up on you when you least expect it to.

Some of the most common injuries include pinched nerves which can wreak absolute havoc on your body, while other common lower back injuries include slipped discs, ruptured discs, and “knocking vertebrae” that will send shooting waves of pain all over your body when you make sudden shifts or movements.

These kinds of injuries are almost always going to need to be addressed with the help of trained medical professionals. Don’t be shy about visiting a doctor when you’re talking about lower back pain or lower back injuries. There’s no reason to have to suffer on a day to day basis when you don’t have to, and lower back injuries will rob you of your power, your flexibility, and so much more.

This isn’t anything to fool around with!