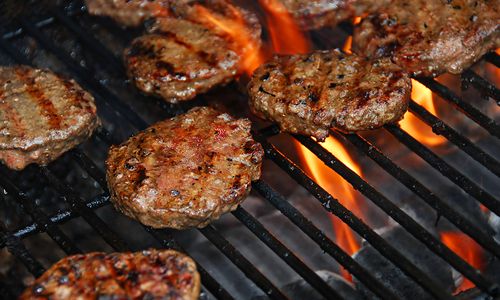 You know all year long we wait for it to happen… another season to come and to pass. The seasons each have a purpose. The first fairly warm day into spring, what do we do? We break out the grill and throw some meat on it.
By the summer, our BBQ game is in full effect so, we keep an extra large bag of the Kingsford Charcoal in the garage. However, when fall breezes roll around, the game changes once again. Oh yeah, we BBQ but, now the theme has totally change. If you thought we were rowdy before, get ready for some real action because it’s time for football!

Before the game, the women and kids involve themselves. They likely prepare the side dishes, (potato salad, Bush’s Baked Beans for grilling, fresh cole slaw), spice up the corn, dole out the dips and chips, and make sure the beer is the coldest. The men throw the charcoal on the grill to get it heated up for the sausages, burgers, hot dogs and ribs. There are a lot of game day recipes out there but the classics never fail. If you smell the coals burning, you might as well ring the dinner bell ’cause it’s about to go down.

To me there’s nothing like having your rival team fans over on game day for the trash talking, finger licking good times. I mean, you don’t have to have a team. It’s the BBQ that brings people together. Nonetheless, around my house all the hooting and hollering is between team Roll Tide and the losing team, whoever they may be on game day.

At the same time, it doesn’t take long before my son starts chase the beautiful little girl from next door or for Shady Grady to bring up his college football days (knowing he sat on the sidelines) and for the cooler to run low on beer. It’s almost time to put the sauce on the meat and for the game to begin. Tensions are running high as nobody want to lose, however, somebody has to.

When the food is done, and after everyone has a plate in hand, we pray for the losing team and hope for a brighter future. Most of the time we eat too much and are glad to retreat into the living room to watch the game. It’s also the only time we are not talking a lot of noise about who’s going to win the game.

In case you missed it, the game between Alabama and Wisconsin on September 5th made ABC history for highest ratings. That’s how serious Alabama fans are. Alabama rolled over Wisconsin, 35 to 17, baby! It’s not me, but guess who has clean up?

The food was good, the company was good and the game was extraordinary for a season opener.I can’t wait to go to a tailgate party this year. Those are the best times, it seems. Being with a collaboration of Alabama fans makes for a great party, although many just come for the BBQ.

Yeah, we’re avid fans of Alabama, however, it doesn’t matter if you have  favorite team. You’re welcome at my house. We’re family here, right along with Kingsford Charcoal. We’ve been together for a while now and well, you just don’t break up a winning team.

Get your bbq game on point by following @KingsfordCharcoal find the hashtag #BBQDiplomacy.