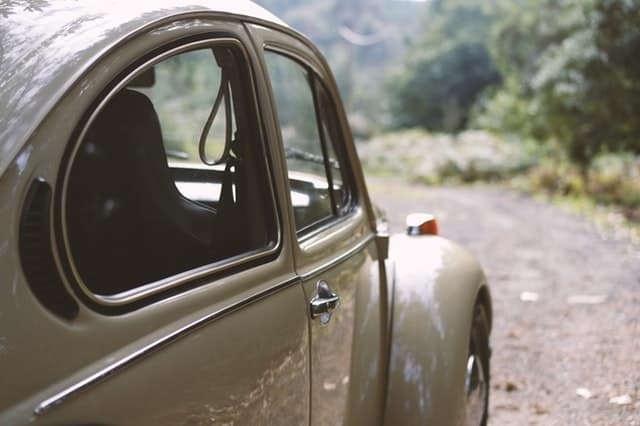 Automotive expert Alex Perdikis recently blogged about the Yugo and Pinto, two not-so spectacular car models that never should have made it to a showroom floor. But, made it they did.

The wacky world of cars is full of what seemed at the time to be a grand idea but quickly fell into the “What were they thinking?” category. And it wasn’t only engineers who came up with these oddities. Sometimes it was car owners who delved into the outer realm after purchasing a perfectly normal vehicle.

Here are six of the wackiest.

The grass car is indeed “a thing.” Originally conceived by Rick Griffiths, co-owner of the Dream Turf company, the Turf Bug was a 1974 VW Super Beetle under the artificial grass. Covering the car in turf took over 120 hours of labor, outdoor adhesive and over 900 screws.

Other car owners took the idea and placed their own stamp on the “green” car idea. Some decided artificial grass was, well, too artificial and covered their cars in actual sod with grass seed. The grass had to be watered. No word on how it was mowed.

Electric cars don’t seem shocking now, but in 1942 putting the words “electric” and “car” together was downright astounding. But, Parisian designer Paul Arzens didn’t stop with one surprising innovation. His Oeuf électrique, or electric egg, was a fascinating combination of forward thinking.

The rail locomotive designer and painter’s car had three wheels, ran on electric batteries and was made of curved Plexiglas and hand-formed aluminum. And, of course, it was shaped like an egg. Clearly, Arzens was ahead of his time.

Aircraft engineers have a history of moving from the high flying world to car development. William Stout was one such designer. Well-known for his integration of leisure and luxury into his Stout Air Lines service, his foray into car development also incorporated driver and passenger comfort.

The 1936 Stout Scarab was, in essence, a dining car on wheels. Powered by a Ford V-8 rear engine, the Scarab looked like cartoon version of a minibus. The high price tag of $5,000, the equivalent of $90,000 today, was too high for most people, far more expensive than other luxury cars of the day. Less than 10 were produced.

Lest you think weird and wacky automotive development only happened in the early years, take a look at the 2001 BMW GINA Light Visionary Model concept.

This wasn’t the first oddly chunky and geometric concept Chris Bangle, BMW design director, ever came up with but what he used to cover the exterior was a first — spandex. What better way to cover an aerodynamic vehicle’s shifts and movements than polyurethane-coated spandex?

One look at the Norman Timbs Special and you automatically realize its designer had to have a racing background. And, you’d be right. Norman Timbs was an Indy racing engineer. His 1947 Special had a Buick Straight 8 rear chassis engine, raindrop tail and front-mounted cockpit. There never had been and never will be another like it.

WWII jet fighters inspired a lot of automotive engineers. But the 1953 Firebird 1 XP-21 actually was a four-wheeled jet fighter. The car had a bubble cockpit, tail fin and an engine that generated 370 horsepower — a staggering amount of power in 1953.

In addition to the wacky vehicles mentioned, there’ve been double-cars, duck cars, cat cars, mouse cars, house cars and whatever else comes to the minds of designers, marketers or proud owners. One thing’s for sure, cars aren’t just for getting around. Automobiles hold a unique place in our culture that not only inspires, but makes us laugh as well.