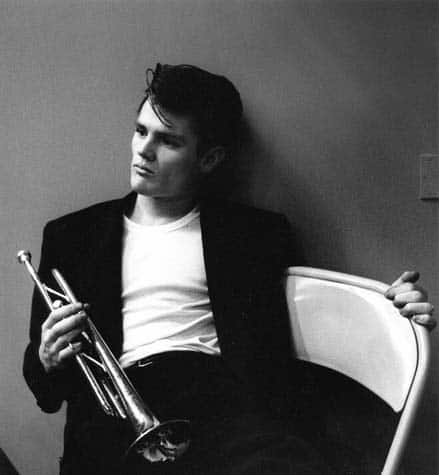 What do you get when you combine movie-star looks with an iconic musician?

Before I answer that I also want you to throw into this picture a voice so delicate that it sounds as if it could snap at any minute. And then to complete the image you need to add some trumpet playing, not just any, but the kind that instinctively winds itself gently and seductively around any melody.

Have you got the picture? Good, then it can only be one person – Chet Baker.

Chet Baker was a jazz singer and a trumpeter who blew into the jazz scene in the early 1950’s, and his music came to define the West Coast “cool jazz” sound for that time period.

A good place to start listening to Chet Baker is the import CD, The Best of Chet Baker Sings. It’s a compilation of his music that was recorded from 1953-1956, and features many of his signature songs including – My Funny Valentine and Let’s Get Lost.

These two songs and many more of his romantic ballads are frequently included on other Chet Baker collections, but according to some jazz purists out there you will want to stay away from these discs, like the My Funny Valentine compilation.

The issue, as I understand it, is that some of these tracks have had additional arrangements added to them after the original recording sessions were produced. It’s a bit of a muddle though as I have not been able to determine which specific songs have had this work done.

However, jazz purists, like other purists, need to be taken with a grain of salt. If, for example, I were to listen to some of my friends then I would only be enjoying my music on vinyl recordings that were amplified via a collection of tube-powered amps.

The real point in all of this is that Chet Baker has a unique style that comes across quite clearly regardless of the collection that one picks up.

Baker’s singing and playing has this incredibly fragile quality to it, so much so that it creates this sense of intimacy for the listener. When Baker sings you can feel yourself being transported to that cramped, slightly seedy, smoke-filled jazz club.

Unfortunately for Baker, and so many other talented musicians before and after him, he developed a crippling drug addiction to heroin.

It was a crutch that would follow him tragically around for his entire career and ultimately one that probably contributed to his unfortunate young death in Amsterdam in 1988.

That same year fashion photographer Bruce Weber released a documentary on Chet Baker, called Let’s Get Lost. It features both archival and contemporary footage of Baker in conversation and performance, and goes a long way in trying to explain the troubled life that the musician led. It’s a very candid portrait that all too visibly shows the effects of addiction.

The soundtrack to this film is also well worth picking up, although from time to time it can be difficult to find.

Chet Baker ultimately should be judged like any artist by the quality of his work, and in that regard he stands out as a rare voice and talent and worth the time imbibing in.