Home Entertainment Films To Imbibe In: My Top 10 Films 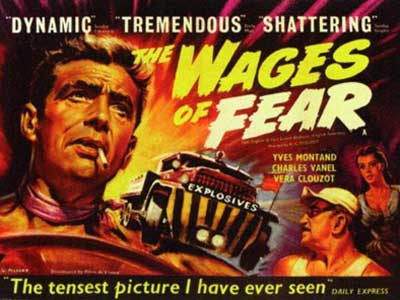 Top Ten compilations can be very revealing things. On the one hand they can confirm to the reader enjoying the list that the writer has impeccable taste and that his or her opinions should be respected.

On the other hand if the reader finds himself disagreeing with the choices put forward than those said lists will be thrown out faster than you can say, “What a piece of..”

So with that risk in mind I present my list, my humble attempt at presenting some worthwhile options for the gentleman who is looking for some films with some depth and meat to them. It’s a list that only scratches the surface, but hopefully it will spark an interest or two in some of the filmmakers presented here.

The films are presented alphabetically.

Klaus Kinski stars in this the first of their five films together. The film is a brilliant example of the themes that dominate every Herzog film. Herzog is obsessed in portraying intense characters, typically men, who often at their own peril push themselves to their absolute limits, both physically and mentally in the name of some grand quest; one that almost always pits them against a cruel and indifferent natural world.

Aguirre was filmed in the Peruvian rainforest, and the story deals with a Spanish solider, Aguirre, who leads a group conquistadores down the Amazon in search of El Dorado, the legendary city of gold.

In true Herzog fashion the film presents a stunning landscape as a backdrop for a man who’s dreams exceed his grasp. The natural madness of actor Klaus Kinski is perfect for this role and the viewer is left wondering where his brand of insanity stops and where his acting begins.

Starring Johnny Depp and Benicio Del Toro.  On the surface this film is about legendary journalist, Hunter S. Thompson and his attempts in 1971 to cover a motorcycle race just outside of Las Vegas, with the help of his off-balance attorney, Dr. Gonzo.

But really what this psychedelically charged film is about is a way of life and what it takes to fuel it, warts and all. It’s a steroid infused visual representation of what’s behind the curtain of the all-powerful and the all-knowing Oz. In other words, it’s a brutal vivisection of the American dream, and what happens to those who don’t buy into the program. It’s funny, it’s brutal and it’s unforgettable.

There’s a reason why Charlie Chaplin was the world’s first superstar before even such a thing existed – the man was brilliant.

He could act, he could write, he could compose music and he could direct. In 1940, a full-year before the U.S. entered the Second World War, Chaplin starred in and directed his stinging response to the madness that Adolph Hitler was unleashing in Europe.

Chaplin, in his first pure talking film, portrays two characters, one an oafish dictator modeled directly on Hitler, and the other a Jewish barber who accidently gets mistaken for the dictator because of their similar features.

It’s a brave and entertaining look at what can happen when the good people of the world decide to ignore the spread of racism and evil. It’s also a film that is just as relevant today as it was seventy-years ago.

Cary Grant, Eva Marie Saint, James Mason, Alfred Hitchcock are all at the very top of their games in this the most stylish of thrillers from the master of suspense – Alfred Hitchcock.

It’s a brilliant tale of mistaken identity and Cary Grant stars as the innocent man accidently caught in a web of intrigue that features some of the most iconic chase sequences in filmdom. Grant is picture perfect as the slick executive who always manages to look impeccable in his gray suit as his world around him crumbles.

It’s Hollywood and entertainment at its absolute finest from start to finish, and should be watched on a very large screen because of the widescreen process used in the making of the film. It’s the kind of film that after watching you’ll probably find yourself saying, “They sure don’t make them like that anymore.”

A great deal of modern filmmaking and filmmakers rely on tricks to tell their stories these days. Quick cuts, computer generated effects and impossibly loud film scores are unfortunately the norm of the day.

But, every so often a new film arrives that celebrates the actual art of filmmaking, and to the mastery and the craft that is employed in telling a story with the medium of film.

Revanche (revenge) is just such a film. The director, who also wrote the film, has crafted a tale of revenge with such intricacy, such beauty and such sheer poetry that it almost forces you to re-examine what it is to be entertained.

The story itself is as old as time, man loves girl, girl is stuck in a situation, man tries to change their lives. But, it’s how Spielmann tells the story that makes this film such a vital piece. The camera is always exactly where it needs to be, one absorbs each and every scene before we move on, and in the end this Oscar-nominated film stays with you long after its conclusion, forcing you to think and examine what you would do in just such a situation. It’s powerful and unforgettable.

One of the most enduring collaborations in American cinema is celebrated in this western classic. John Wayne and director John Ford team up for a celluloid masterpiece that redefines the genre.

It stars John Wayne as an aging Civil War veteran who undertakes an obsessive search for his abducted niece who has been taken by a band of Comanche Indians.

But, if you think you know John Wayne, think again. In this role, he plays someone who is mean, vindictive and not quite the hero we’re used to seeing. It’s a bravado role and it’s all played against the majestic scenery of Monument Valley.

Ford, perhaps more so than any other American director is someone who knows the power and the danger of myth making and in this film he finds the perfect balance between the two.

It’s quite simply one of the greatest epics ever produced. Kurosawa was not, as some people think, a director who only made art-house films for a select few. The truth is the exact opposite, Kurosawa consistently produced these incredibly kinetic films that bristled with both energy and intelligence.

It’s a combination that is perfectly realized in this film that tells the story of a 16th Century village that hires a band of samurai warriors to help them fight off a group of bandits who are forever raiding their village and stealing their food.

This seductive black and white film reminds me of a great wine or a fine scotch that only improves with age. I myself screen it at least once a year just to revel in its artistry.

Orson Welles stars as the mercurial Harry Lime who is living in post-war Vienna just after the Second World War. His best friend, Joseph Cotton, comes to visit after the promise of a job. The only problem is that when he arrives his friend is already dead and the only link is a beautiful mysterious girl, a girl that of course he has to fall in love with.

Graham Greene has written a classic tale of intrigue and unrequited love that crackles with wit in every scene. It also features a legendary soundtrack courtesy of Anton Karas and his zither playing.

If Alfred Hitchcock is considered by many to be the master of suspense than Clouzot was his co-master. The film is the story of four desperate men who volunteer for a suicide mission in a backwater hole of a town in South America.

Their job is to help put out an out of control oil fire, but the only way to do that is to transport a truck load of nitroglycerin over a nerve-wracking mountain road. The film is a nail-biting exercise in masterful filmmaking and is a master class in how to create a suspenseful film.

This is one of those films that people either love or hate because of the level of violence. The story is about a gang of outlaws that have seen better days. They’re operating in and around the Texas-Mexican border and the men are fighting not only for their survival, but also to hold on to a way of life that is disappearing before them. It’s 1913 and cowboys are becoming a thing of the past, but for stars William Holden, Robert Ryan and Ernest Borgnine they are determined not to go down without a fight, and what a fight it is as these outlaws try to stage one last big score.

All of these films are available on DVD to rent or own, and ideally should be screened in their Blu-ray format because of the increased resolution this format offers.

With a bit of luck maybe you’ll discover a new favorite in here, if not, well there’s always that new cigar review to read.