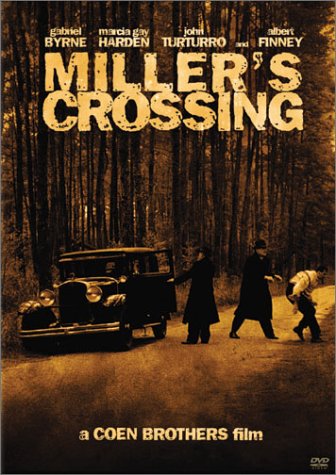 There are some films that actually inspire you to have a drink and a cigar while you are watching them. Any gentleman worth his salt would be hard-pressed to take in this movie and not want to pour himself a glass of scotch, or a whiskey, particularly an Irish one, to enhance the viewing experience of this title.

It starts with a bittersweet, lyrical piece of music that slowly swells as we see a black fedora gently blowing about on the ground in a forest.  For the next 114 minutes we are immersed in the world of men, their friendships, their notions of honor, and of course, their love for whiskey and cigars.

Released in 1990, Miller’s Crossing, by the Coen Brothers, is on the surface about two rival gang leaders vying for power in 1929, and the ensuing gang war that erupts because of their battle for control of the prohibition-era city. But that’s just the synopsis, it’s really about something much harder to describe – Men.

Our gender likes to drink, we like to smoke, and we even like to fight, and in this movie the men do all three – constantly.

The attention to every detail is what lifts this film to the “classic” status. The screen is filled with the authentic sounds of ice clinking ever so casually in a whiskey glass every time a drink is poured. When any of the suited men get up from a couch or a chair the worn leather lets out a sustained groan. Even the wooden floorboards get in to the act, creaking in protest when Leo’s boys or Johnny Casper’s hoods are walking across them.

In the films most famous scene, Albert Finney, a known lover of Montecristo’s, is lying in his bed, in a luxurious smoking jacket, listening to “Danny Boy” and lovingly smoking a cigar. Johnny Casper’s henchmen have just broken in and are walking upstairs to kill him. Before he does anything he takes his cherished cigar, and stubs it out, and then places it in his pocket. He then proceeds to show the hit men that, “The old man’s still an artist with a Thompson.” By the time the scene ends Leo has his cigar back in his mouth and is ready for a fight.

But that’s not what makes Miller’s Crossing, a film to be enjoyed with a Montecristo No. 2, and a Jameson Reserve Irish Whiskey, although that’s not a bad start.

What this film really does is to remind us that our Fathers and their Fathers before them understood the value of friendship and honor between men above anything else. We all know that as men, we will frequently screw up, and that we will undoubtedly sometimes cross a line. But it’s what we do after the mess on which we are judged. Fortunately, men have an innate capacity to “square things away.”

Tom, Leo’s best friend, spends the entire film trying to make things right with his pal. Maybe he does go too far, but in the end Tom knows that he can’t live with himself until he settles the score with his best friend.

The film is a tribute to all the good and the bad that men can do to one another.  But, best of all, it does it with a drink and a smoke in hand, and you can’t ask for much more than that in a movie.