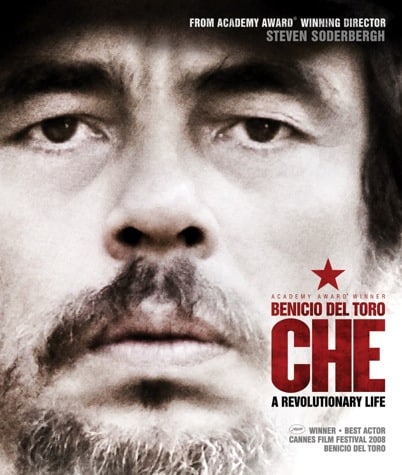 Cuba is a fascinating country, home to some of the world’s best cigars, and depending on one’s political bent, either a sun-drenched paradise, or an island that symbolizes an oppressive political regime. For the purposes of this review the country is the backdrop for a dramatic film that warrants our attention, and as cigar smokers, piques our curiosity.

Regardless of one’s politics, what can’t be disputed is Cuba’s rich history as it relates to their revolution and the colorful principle architects behind that event.

In 2008, American filmmaker Steven Soderbergh directed one large film that was broken up into two films that attempted to separate the myth from the man.  The man was Ernesto “Che” Guevara; a historical figure of world renown, and a man whose very image has undergone a transformation into that of an icon, a global brand for counterculture and revolution itself.

The films themselves, Che: Part One and Che: Part Two, look at two specific time periods in the revolutionary’s brief life. The first film deals primarily with his struggle in the jungles of Cuba, from 1956-1958 when Che, and his group of guerilla’s fought as part of Fidel Castro’s irregular army in their successful attempt to overthrow then Cuban dictator Fulgencio Batista. The second film focuses on Che’s attempts to bring a similar styled revolution to the people of Bolivia in 1967, with disastrous results.

What becomes apparent very quickly in the film(s) is the sheer force of Guevera’s will, and how this singular trait both helped and hindered him through out his life.

Soderbergh succeeds in accomplishing an extremely delicate juggling act in that his films do not place a moral judgment on Che’s politics or his behavior. The man is seen as someone who takes action as a result from his political and worldviews in a way that suggests an almost religious calling. The methods and his rational can and should be debated, but Guevera’s sense of conviction cannot.

The actor, Benicio del Toro, won the 2008 Cannes film festival award for best actor for his portrayal of Che Guevara, and after watching both films it’s easy to see why. It’s actually less of an actor playing someone, and more akin to del Toro inhabiting the essence of Guevara.  There is no sense of a “movie star” pretending to be this world-famous figure; he just simply is Che, with all of his contradictions intact.

Both films rely heavily on Guevara’s own words as a source, with the first movie using Che’s, Reminiscenses of the Cuban Revolutionary War, and the second film/part employing The Bolivian Diaries. These recollections anchor the films in a historical sense and help to provide context for what the revolutionary was hoping to accomplish.

Che succeeds as a film because of its ability to take a polarizing political figure and to present him as a person and not as a martyr, nor a villain, but instead as a deeply committed and flawed man. For anyone who has ever smoked or wanted to smoke a Cuban cigar it’s an important artistic introduction to one aspect of the island of Cuba and its legendary leaders.