Home Entertainment Films To Imbibe In: Blue In The Face 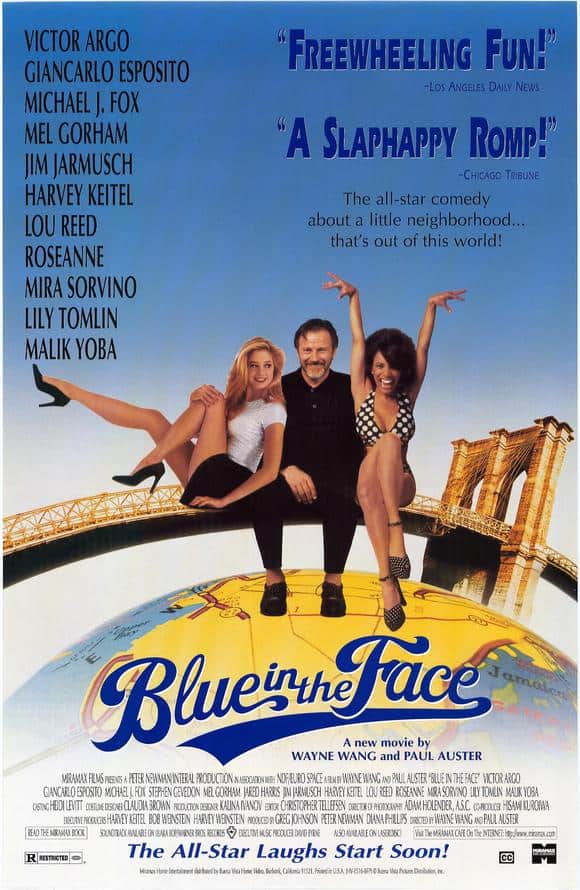 The film, Blue in the Face, is a strange sort of sequel. It’s a companion piece to the previously reviewed film Smoke, with both titles being released within months of  each other in 1995.

From every frame the film exudes this feeling that the project was a true labor of love for everyone involved, and it has a very collaborative feel to it. Which sounds redundant given that film is a medium that depends on a great many people to bring it to fruition. But in this particular case it’s very appropriate, because the actors weren’t following a traditional script.

The actors in collaboration with the writer and director worked together to create “situations” for the film that was supposedly shot in just six days.

Harvey Keitel reprises his role from Smoke as Auggie, a loveable cigar store operator, who like a modern day chain-smoking Pied Piper draws all sorts of characters into his Brooklyn shop for a smoke and a chat about the elusive nature of life.

At the start of the film we are treated to Mr. New York himself, the singer songwriter, Lou Reed, who goes on to tell us what he thinks of his city in philosophical terms while enjoying a cigarillo.

This introductory piece helps to set the tone and the style of the film. Every ten minutes or so the film drops out of its narrative to feature a clip of a real resident of Brooklyn talking about why he or she loves his Borough so much. In addition to these segments there is a steady stream of celebrities who drop in to the cigar shop for a cameo performance.

Some of the guests that drop by include: Roseanne Barr, the comedian known for her TV show during the 1990’s; Michael J. Fox, the famous Canadian of both TV and film fame, and the singer Madonna, a performer who has reinvented herself so many times that she can now be considered a brand unto herself.

The fun thing about all of this improvisation is that when it works it’s brilliant and, for the audience, it creates a heightened awareness that the unexpected can happen at any moment in any scene. But at the same time, the challenge with creating a film around improvised events is that there are some actors who are more comfortable with it than others.

Harvey Keitel is an actor that falls into the latter category. In every scene he looks and feels completely natural. Oddly enough some of his best scenes are of him just reacting and listening to the other actors doing their cameos.

But for every Keitel there’s an actor who tries just a bit too hard and equates improvisation with an over the top performance, and unfortunately there are a few of these in Blue in the Face.

Despite this the film has an infectious quality about it.

Blue in the Face is ultimately an odd kind of filmic experiment that just about gets it right. But where the film falls short in terms of its narrative, it more than makes up for it with its overall theme. That being, that life is full of surprises and unexpected twists and that like a good cigar it should be grabbed with gusto whenever possible.