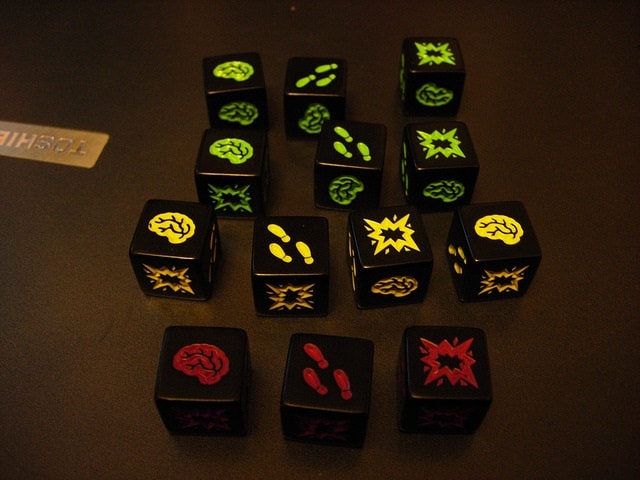 Gaming is something that has become somewhat of a pastime for many people. And, now that hobby gaming has provided us with a lot of interesting and new games, it really has become easier to find games that push our minds to their fullest capacity while playing.

Dice games have really been taking off in recent years and, because of that, you will find that there are a lot of great ones for you to choose from. Let’s take a closer look at some of the best games out there that are meant to prod your brain a bit.

Pandemic: The Cure is a dice game based on the Pandemic engine, where you are working as members of the Center for Disease Control (CDC) in Atlanta, Georgia. By rolling the dice, you are determining where outbreaks of certain diseases are happening, working toward researching those diseases, and trying to complete the goal of eradicating those diseases before they cause a worldwide pandemic.

Yes, Dungeons and Dragons (usually called D&D) has been around for a long while – it’s currently in its 5th edition. This role-playing game puts you in the role of an adventurer, going out into a fantasy world and fighting monsters for glory! It’s based on a 20-sided die system, where you roll the die (or dice) to determine if the actions that you say you are doing actually happen or if you fail at that action.

Many times, all you need is a couple of D&D Guide Books (just make sure that they are from the same edition of the game) and some Easy Roller Dice so that you can get going. Most people own at least one set of these dice so that they have every variant of die that they need in order to keep up with what’s going on in the game.

This fast paced game is similar to Yahtzee, asking you to roll dice and combine them for different numbers, which are shown on your sheet. Mark off as many numbers, in order, as you can to get the most points and win the game.

Ever want to be a big, scary monster that is trying to take over Tokyo or New York City? Play knock-off versions of some big baddies (Godzilla, King Kong, etc.) and roll dice Yahtzee style to fight against other monsters while taking over the city. These games have special powers, too, allowing you to boost your monsters and make them that much better in the long run.

If you want something a little lighter, Zombie Dice is always a good choice. This push-your-luck game makes you the zombie, who is trying to catch survivors and eat their brains before being “shot” with a rifle. You roll dice, three at a time, collecting brains and rifle shots as you go. You can choose to stop when you want to (or when you collect 3 rifles, which is how you bust). Players continue to take turns until one player collects 13 brains between each of their turns.