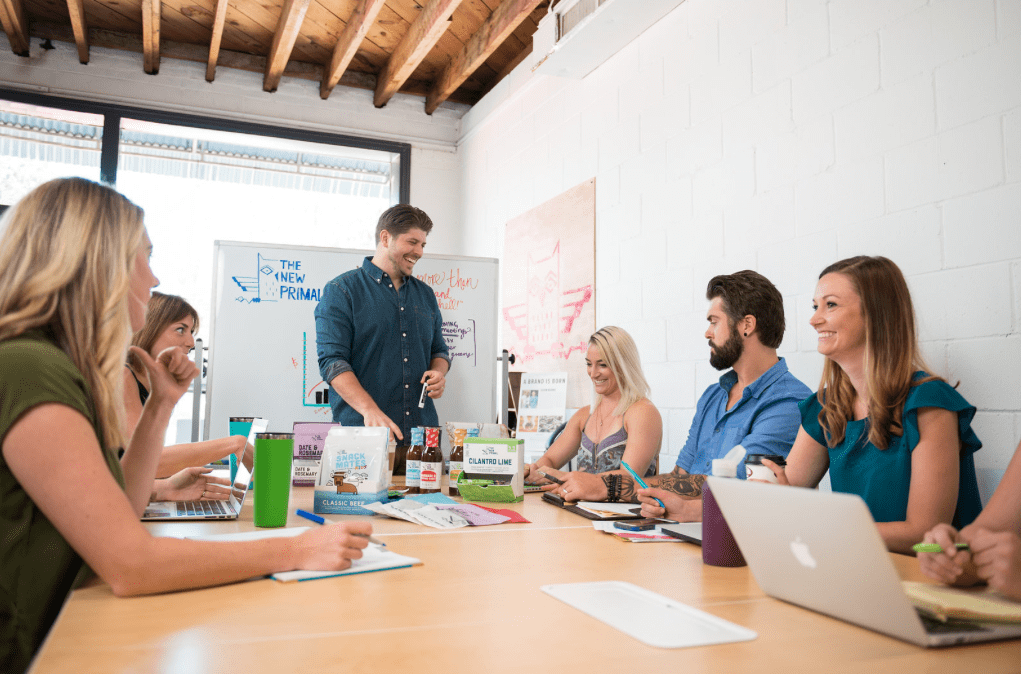 The New Primal founder, Jason Burke has an inspiring entrepreneurial story any Aspiring Gentleman will find valuable. He created a jerky business with products sold in 6,500 retail locations from Whole Foods to REI. 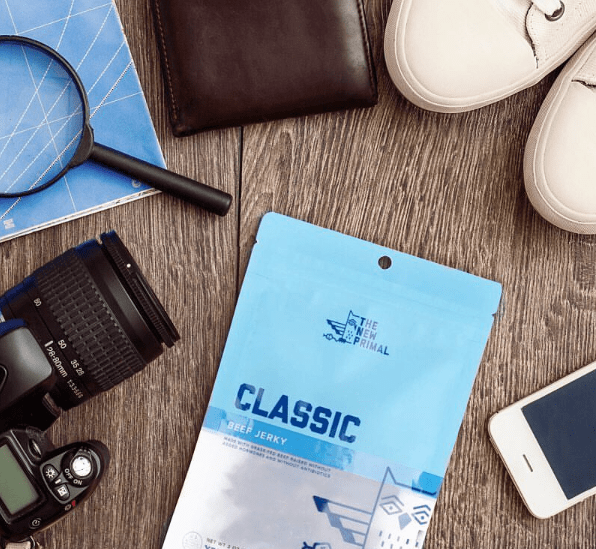 Jason had a corporate sales job at a software company and was overweight, tired and physically unhappy. He finally decided to make a lifestyle change, joined a cross-fit gym and began eating a paleo diet. The story goes that Jason quickly grew tired of snacking on almonds, so he started bringing jerky to work. As he began reading the labels on the jerky options, he realized they didn’t use grass fed beef and were packed with sugar and sodium, which was a “no go” for his new diet.

Jason began making his own grass fed beef jerky in his kitchen at home and as the saying goes, the rest is history.

I chose to interview Jason Burke to dig much deeper into his story. 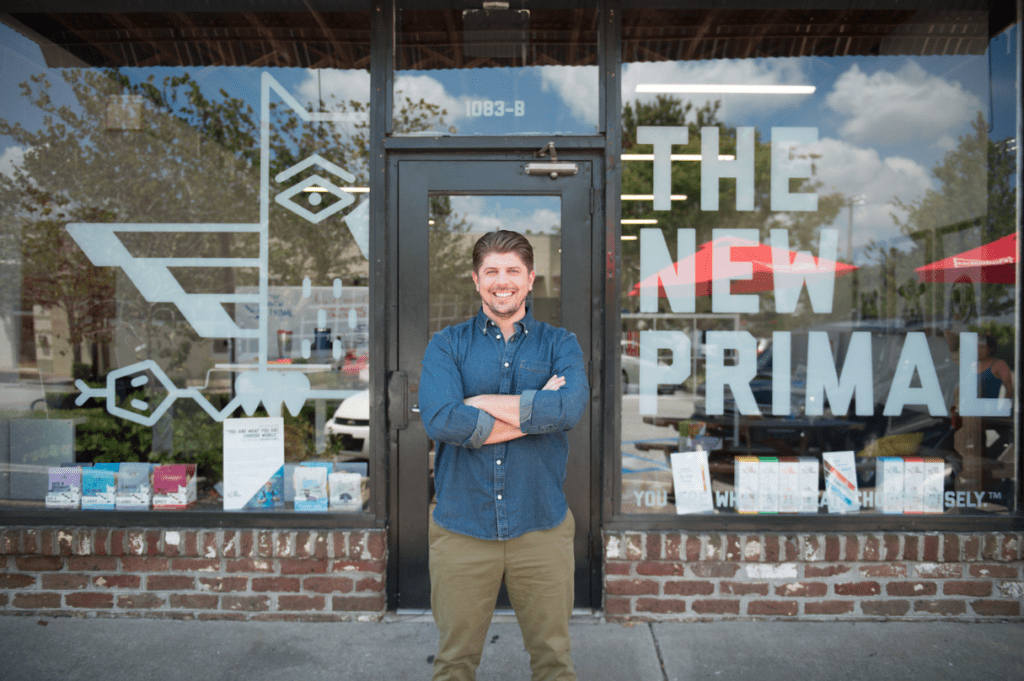 What does a jerky business founder’s day look like?

When I’m not traveling my day typically looks like this:

6 AM: I’m normally up before anyone else in my house to go through my routine, which involves reading, writing goals for the day, affirmations and coffee. I make sure to do something active several days a week in this process, even if it’s a 10-minute bodyweight workout.

9 AM: Maker Time. Our office has adopted Gary Keller’s “Manager/Maker time” concept from his book, The ONE Thing, so my mornings are blocked off for my “maker time.” Maker time is where I get to be creative and work on the absolute most impactful things for the day before I’m overwhelmed by questions, meetings, phone calls and the occasional fire drill.

12 PM – 6:00 PM: The afternoon is reserved for management time where I take calls, meetings and help solve the daily challenges that come with the territory of running an emerging food brand.

What’s new in the jerky business?

Scaling the business is a primary focus. We haven’t been able to keep up with ourselves which has somewhat limited our ability to grow as fast as we’d like. I can say that in the first quarter of 2018, you’ll see something new in the meat snack space from us and a product unlike anything on any store shelf today.

Our long-term intentions are to have high-integrity food products in every aisle of the grocery store and to transcend a single category. Most recently, we’ve expanded our offerings into kids snacking with a sub-brand called “SnackMates” and into condiments with our new line of Whole30 Approved marinades. 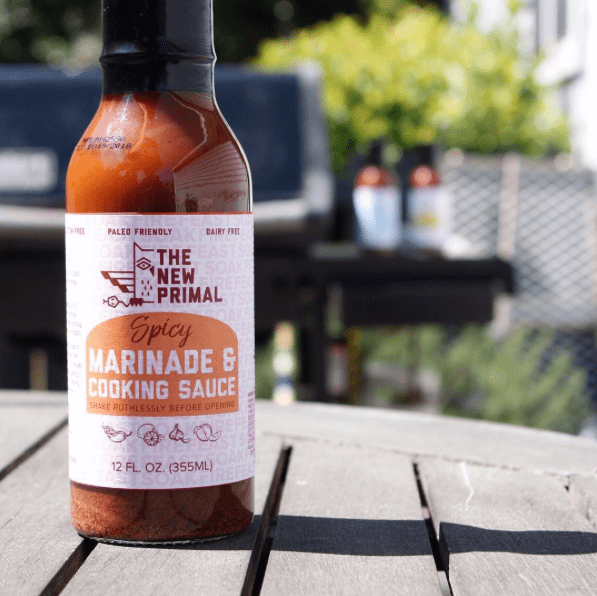 As we’ve expanded into both new categories, we’ve found the incumbent offerings available to be dominated by sugar-laden, unhealthy products. We’re excited to be one of the agents of change in what we believe are irreversible and generational shifts in consumer preferences as it relates to the food we eat.

I strive to create a culture constant with personal improvement, ownership and positivity. We dedicate time weekly to grow as individuals. Everyone in our office takes pride and ownership of their role in the business, and there’s no place for complaining and negativity in our workplace.

I consider my style diplomatic. I prize interpersonal harmony.  I see myself as the social glue and affiliate force that keeps groups together.  I believe my team would say I’m kind, social and giving. I have a knack for being able to resolve conflicts peacefully. I tend to put less emphasis on challenging employees and more emphasis on putting people in positions to succeed and leverage their strengths.

How Jason makes an idea a reality

I toss out ideas daily. My team laughs at most of them, but when we come up with something we believe has legs, it begins with a whiteboard session to brainstorm.

There aren’t any bad ideas during a brainstorming session. Once we’ve fleshed out the framework of a product concept, we try to create the recipe. Once we have a base recipe in place, we involve some of our closest retail category managers in the innovation process by inviting them into the process and requesting their feedback.

The iteration process has been as short as two weeks from idea to a finished recipe; other times it has taken as long as a year. There’s no magic formula, and gut instinct drives a good bit of our innovation, but we iterate very much like a tech business. We lean towards getting something out quickly to our core audience, monitor feedback closely, and make improvements as fast as possible. 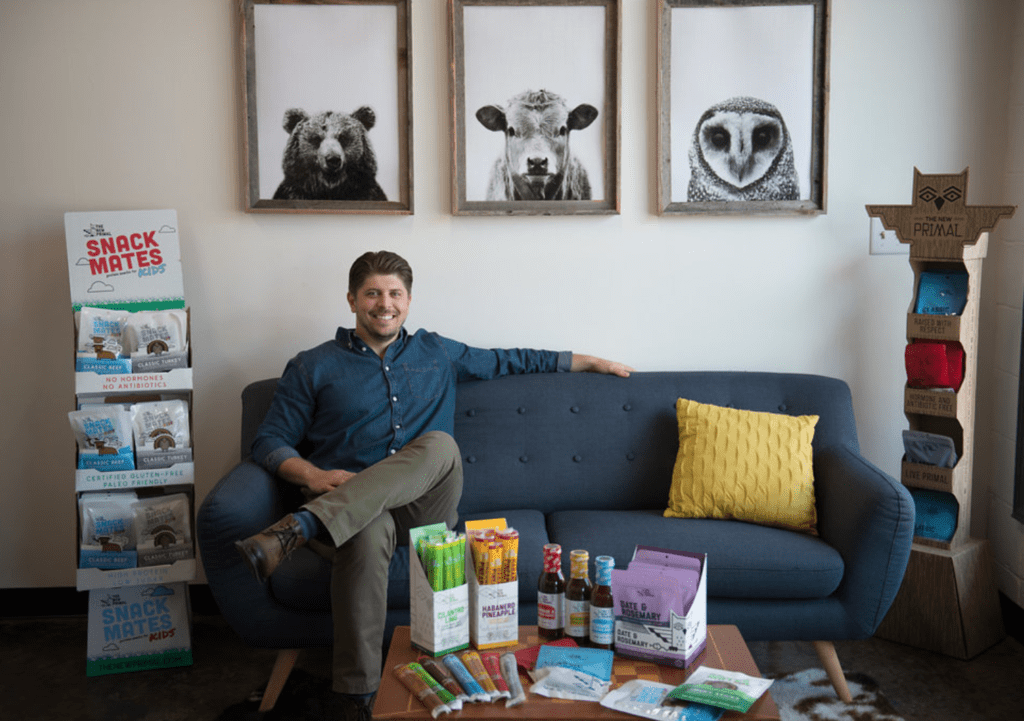 Where It All Began For Jason Burke

“I’m originally from Florida. I come from a blue-collar, hard-working family. I went to schools in affluent districts where most of the students came from white-collar families. I was always envious of the homes my friends lived in, the cars their parents drove, and the material things they owned. I believe thisplanted the entrepreneurial seed in me.

I started a landscaping business in high school, which I kept through college because I was earning a really good living. My first job out of school was a 100% commission financial services job where I excelled but was not passionate about the business. I moved to Charleston in 2008 and took a job selling software as a means to get to Charleston. Two years into this new career, I began focusing on my health and fitness.

My biggest struggle was snacking at my desk, and I couldn’t eat another almond. It all started at home in my kitchen, by accident, as most great ideas do. I began making a no-sugar, grass-fed beef jerky at home in 2009 to take to work as a desk snack.

By late 2010, I had enough people at work and my gym asking me to make jerky for them that I thought I might be onto something (plus my wife was over the six dehydrators constantly humming in our kitchen).

For the next two years, I took the time to learn the art and science of beef jerky making, including all of the USDA and regulatory requirements. It was a part-time business for me from late 2010 to late 2012, during which we only sold our products through our website.

In late 2012, I decided to hang up my corporate hat and go full-time into the beef jerky business. When we launched, there was not a single grass-fed beef jerky option in the marketplace. The options for jerky sourced from humanely raised animals were non-existent. We began with the idea to take the gas station out of beef jerky. Five years later, we have products sold in over 7,000 retail locations across every state in the U.S.

Why cash-flow is the biggest issue in running his business

I believe cash-flow is always the biggest challenge for an emerging brand like ours.

We source exceptionally high-quality ingredients and humanely raised animals, both of which are very expensive. The raw materials have to be purchased well in advance of ever getting paid by a retailer carrying our products. Outside of that, the meat snack category, in particular, is dominated by a few traditional jerky companies who are notorious for using fuzzy marketing terms like, “natural” which does not have an actual definition.

Being able to educate the consumer about the benefits of high-quality ingredients and humanely raised animals on a package sitting on a store shelf that is dominated by these mainstays is not easy. It’s also not easy to compete on price point. Through all of the ups and downs of growing a start-up business in a terrain dominated by proverbial giants, we’ve always kept our eyes on the fact that what we’re doing is contributing to the wholesale change in how animals are raised.

This idea has far-reaching implications including the impact we’re making on people’s health, and the impact holistic farming practices have on the planet. The confined animal feedlot operations where so much of our meat is raised are some of the biggest sources of pollution in our air, water and soil, along with being the largest purchasers of antibiotics in the U.S. We’re educating the consumer on the benefits of consumer high-integrity food products which creates demand for humanely raised animals that are raised on family farms centered around holistic farming practices.

When I asked Jason what inspires him most

Founders of businesses, no matter the category, are incredibly inspiring to me. The process of creation and the founder’s journey is one of the most inspiring subjects for me to study.

I’m inspired by my wife’s support of my entrepreneurial dream and the daily words of encouragement she offers. She’s never doubted me or any of my crazy ideas.

I’m inspired by my team who join me on this journey. The team is in the trenches with me, and everyone carries their weight. We operate as a family and everyone hustles and works like they own the place. There’s no shortage of natural leadership ability in our office. 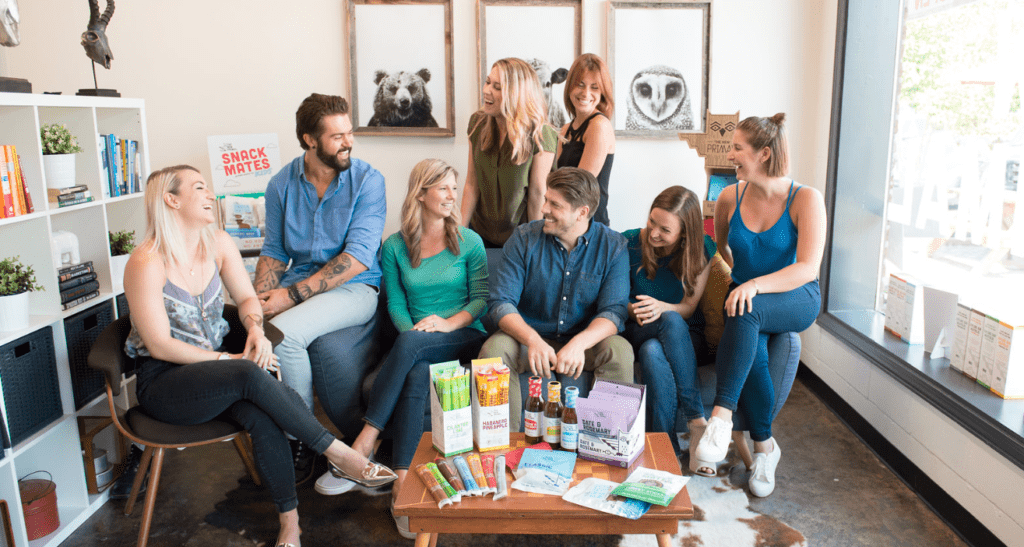 Setting the mood for the team

In the office, I make it a point to keep the atmosphere as light as possible. We face enough adversity and setbacks daily, and I don’t want my team dwelling on the negative. Bill O’ Reilly’s “Do It Live” outburst video on Youtube is an office favorite for lightening the mood.

“I read at least ten pages per day of a self-development book. As a quick daily one-page read, I’m encouraged by the Stoics and am currently reading Ryan Halliday’s “The Daily Stoic.”

While I’m somewhat of an analog (pen and paper) kind of guy, I utilize Evernote regularly. It’s beneficial to organize meeting notes, manage to-do lists and record creative thoughts – it keeps the yellow-pad clutter I create somewhat at bay.”

“Since I’m in the food space, the trends that excite me most are the ones related to the disruption taking place in this channel.

Who else should we be paying attention to

“@thelastblockbuster on Twitter might be the most entertaining account I’ve run across. @melissahartwig, founder of the Whole30 program is entertaining and enlightening. @mindbodygreen is out to revitalize the way people eat, live and move. The quality of their content is second to none in the healthy living space.

Jason has offered us great insight on the challenges of starting a food brand and how he’s been able to stay true to his mission to provide clean food, while scaling his business to become one of the top selling jerky companies in the natural foods segment.” 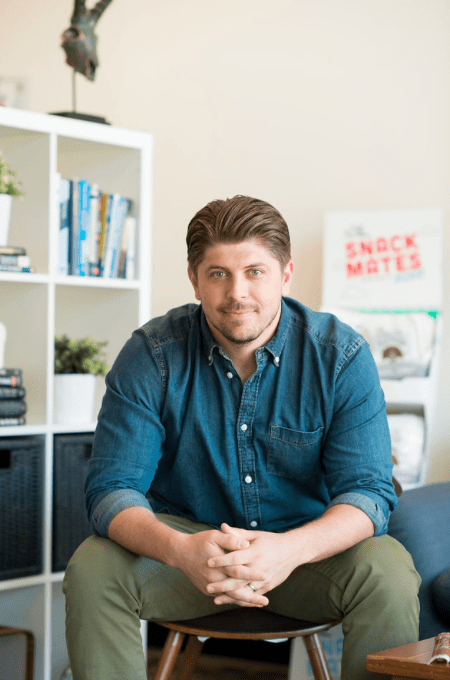 Today, Jason and The New Primal team continue the company’s mission to bring clean, grass fed meat snacks and marinades to the marketplace, disrupting the “gas station jerky” industry. One huge recent win for the brand is that their products are now available in over 900 7-Eleven gas stations, bringing clean and healthy food to the masses. Since its inception (5 years ago), Jason has grown The New Primal from being located in 4 stores to over 6,500 retails locations nationwide Including Whole Foods, REI, Publix, Harris Teeter, Shop Rite, Target and more. For more information on The New Primal, visit www.thenewprimal.com.

How to Choose to Outsource a Legal Transcription Service

6 Smart and Fun Alternatives to the Office Gift Exchange